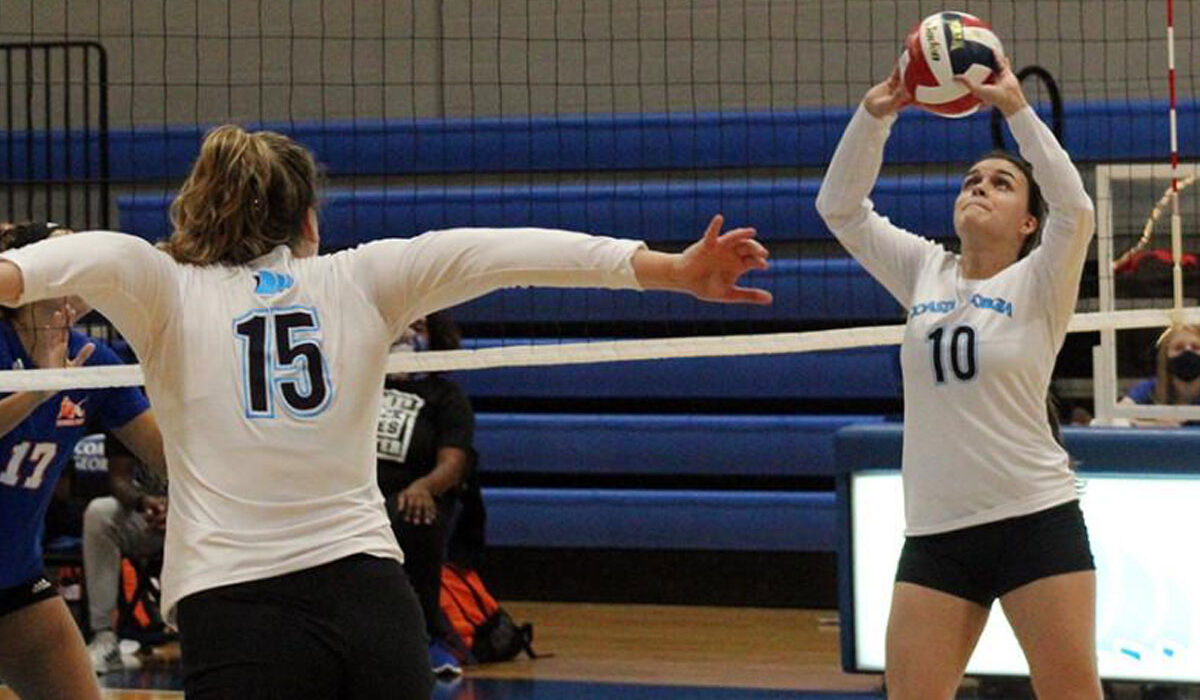 CCG Athletics
Val Every, Director of Sports Information and Marketing

BRUNSWICK – The College of Coastal Georgia Mariners came back from a two-set deficit to beat the No. 2 ranked team in the Sun Conference and defending Tournament Champions the Florida Memorial Lions. The Mariners lost the first set 24-26 and the second 13-25, but came back and won the last three 25-23, 25-22, and 15-12 in the revenge match for the 2019 TSC Tournament finals.

Sophomore outside Giovana Larregui Lopez recorded a game and career-high 22 kills. She also records her third double-double of the season by adding 15 digs, a team-high.

Freshman middle blocker Claire Terwilliger lead the Mariners with a .333 kill percentage after recording seven kills and one error on 18 attempts.

Coastal Georgia had a slow start to the match. In the first set, the Mariners allowed the Lions to take a 16-6 lead.

Despite the slow start, the Mariners started to chip away at the deficit, closing the gap 18-22 forcing Florida Memorial to take a timeout. Muldrow came out of the timeout swinging and put up her second kill of the match by forcing it through the Florida Memorial double-block and then added a block of her own to close the gap to just two points.

At set point for the Lions, Carlson laid down a brilliant deep kill to keep the Mariners in the game, 23-24. To tie it up, Carlson recorded an ace to push set one into extra points. Despite the valiant comeback effort, the Mariners fell just shy, losing set one 24-26.

In the first set, Larregui-Lopez led the offense with 6 kills, the most on both sides of the net. She recorded a .364 hitting percentage.

Freshman defender McKenzie James stepped her game up after set one. She recorded only one dig in set one and added five in set two.

Senior outside hitter Hollenbacher made her presence known in set three by adding three kills of her own. She was only led Larrregui Lopez who totaled four in the third set. Hollenbacher also added a block assist and five digs to help earn the Mariner’s set victory.

Coastal Georgia’s defense stepped up tremendously in the fourth set. The Mariners recorded 30 digs in set four which was more than double all of their previous sets. Seven came from Larregui Lopez, six from Hollenbacher, five apiece from freshman libero Emery Wyatt and Laureano-Andujar, and three from middle Terwilliger. The remaining four digs came from freshman Jade Goudsblom and Jillian Lui.

The Mariners defense limited the Florida Memorial hitting percentage to 0.074, their worst of the match, which allowed the Mariners to come out with a 25-22 victory.

With tensions high, the Mariners and the Lions played extremely tight volleyball in set five. Neither team led by more than one point until Coastal Georgia took a 13-11 lead off of a kill by Terwilliger. The Mariners stole a three-point lead late in the set with a well-timed ace from Hannah Williams. Florida Memorial was unable to come back from a three-point deficit so late in the game allowing Coastal Georgia to take the fifth set and the match.

The Mariners continue their homestand with a match this Wednesday, Sept. 30 against Webber International.