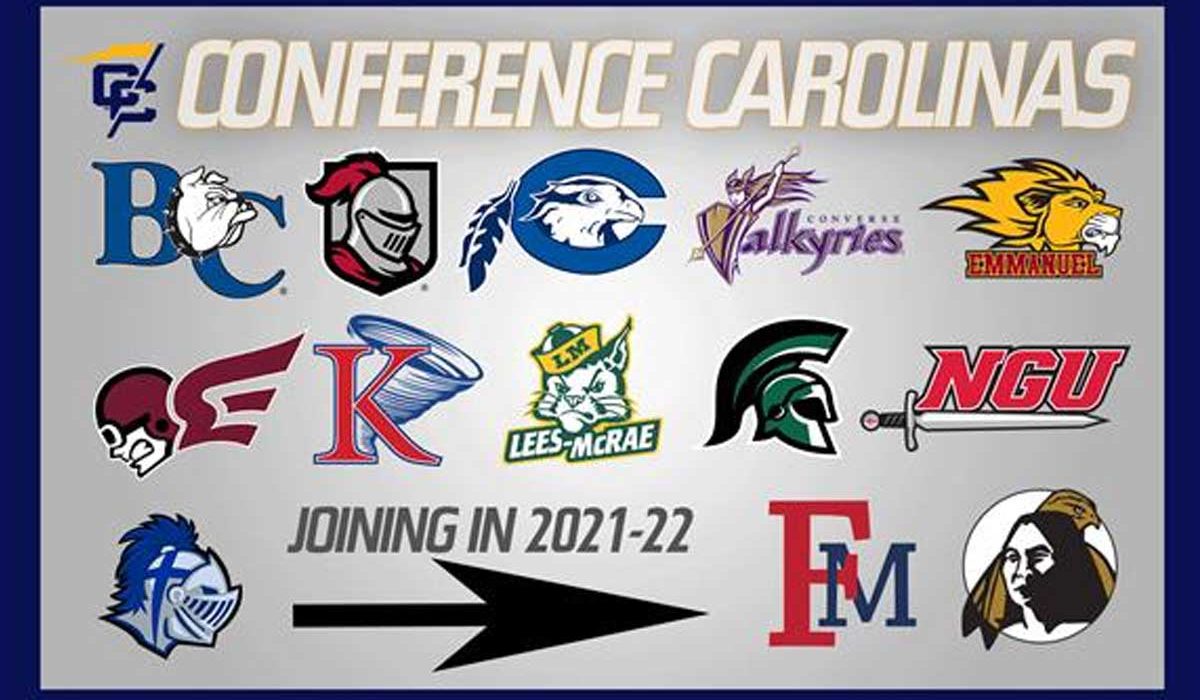 GREENVILLE, S.C. – The Conference Carolinas Presidents have voted unanimously in favor of adding Francis Marion University and UNC Pembroke as the 12th and 13th members of the NCAA Division II conference.

Both Francis Marion and UNC Pembroke have accepted their invitations to join the league and they will officially begin competition in Conference Carolinas in the 2021-22 academic year.

“This is a historic day for Conference Carolinas,” Commissioner Chris Colvin said. “Our goal each and every day is to work to make our league better. We have accomplished that and so much more with the addition of Francis Marion and UNC Pembroke. These two top-notch institutions align tremendously with our conference beliefs. We are thrilled to have them join to help us continue to lead the way in the classroom, in the community and at the highest levels of competition as we strive to be Champions in Body, Mind and Soul.”

“Preserving a natural rivalry that has spanned nearly half of a century is extremely important for both universities,” Carter and Cummings said. “The magnitude of the rivalry between the Braves and Patriots has intensified greatly since the first meeting between our athletic teams in December 1971, and that has been overshadowed only by the sportsmanship that has been shown by the student-athletes, coaches and fans from both sides.

“We are extremely proud and excited to now continue that rivalry as a part of Conference Carolinas. The league’s commitment to body, mind and soul aligns completely with the missions of our institutions, and we are excited to help strengthen those directives beginning in 2021-22.”

The addition of Francis Marion and UNC Pembroke is also a tremendous geographic fit for Conference Carolinas in that it will give the league five member institutions in Eastern North Carolina and South Carolina, which will create a greater geographic balance in the conference and help with scheduling.

Francis Marion is a comprehensive public university located in Florence, S.C., the heart of the state’s Pee Dee Region. It was founded as a classic liberal arts university and that remains the core of its academic programs, although in recent years it has added a number of professional programs in the health sciences, engineering and business. Its graduate-level programs have increased dramatically in recent years. Francis Marion prides itself on steadfastly adhering to its core mission — to provide superb higher education opportunities for the people of its region and the state of South Carolina. A large percentage of the university’s 4,000 or so students are the first in their families to attend college. As a consequence, FMU works hard at maintaining its reputation as South Carolina’s best educational value and one of the most affordable universities in the region. The university is named for Revolutionary War hero General Francis Marion. It is currently in the midst of celebrating its 50th anniversary.

Located in the southeastern North Carolina town of Pembroke, UNC Pembroke is a spirited community of nearly 7,700 students (6,353 undergraduate) with a rich American Indian history. UNC Pembroke is one of the safest campuses in the 17-campus University of North Carolina System. With small class sizes and a low student-faculty ratio, UNCP is a growing university that empowers students to go on to live vibrant, fulfilling lives. Possessing 41 undergraduate programs and 18 graduate programs, fantastic faculty and ideas and organizations at their fingertips, UNCP students are poised to excel in life.

Conference Carolinas has a rich tradition in roots that dates back to its inception on Dec. 6, 1930. The NCAA Division II athletics conference presently has member schools located in Georgia, North Carolina, South Carolina and Tennessee.

Conference Carolinas believes in the development and formation of the whole person in body, mind and soul. Conference Carolinas students are nationally recognized for their extraordinary success in the classroom, in the community and at the highest levels of NCAA competition.